Although DDOT routes #27 Joy Road and #47 Tireman are two separate Detroit bus routes today, at one time in this city's transit history that was not the case, as both routes were once part of the same bus line.
-- TIREMAN AND JOY ROAD STREET TRIVIA:
Joy Road (actually "Two Mile Road" when viewed as a part of the city's Mile Road System) is today a more heavily traveled thoroughfare than Tireman Avenue, which parallels Joy Road one-half mile to the south.  However, this has not always been the case throughout the city's history.

Prior to the 1920's, Tireman Avenue (named for Joseph Tireman (1786-1882)—a major farmland owner along Grand River in Greenfield Twp., where the road named for him bordered) served as the boundary road for a number of communities in existence at that time—initially separating Greenfield Twp. to the north and Springwells Twp. to the south.  The street we know today as Joy Road (named after James F. Joy (1810-1896)—a Detroit landowner, businessman, lawyer, politician, and an American railroad magnate) was basically a rural road known as Bonaparte Road (like in Napoleon Bonaparte).  With Bonaparte Road not yet a continuing roadway through Detroit (it ended at Livernois) and confined to more rural areas of Greenfield Township and westward, Tireman would become the direct through-route in that area for traffic into and out of Detroit.

Joy Road wouldn't gain its prominence until after Detroit had completed the extension of its borders westward in 1926.  By 1929, the city had turned the roadway into an east-west crosstown through-way by connecting Bonaparte Road (which ended at Livernois) with the original Joy Road which ended at Grand River.  By widening and merging Highfield and Dailey streets between Grand River and Livernois, the two previously unconnected roads (Joy and Bonaparte) were now connected, forming what we know today as Joy Road.

On June 11, 1920, the Detroit Motorbus Company—the first permanently successful transit bus company to provide motor coach service within the city of Detroit—would launch its first bus route along E. Jefferson Avenue on the city's east-side. Over the next few years the company would expand its service by adding new routes, primarily on the city's west side. One of these new west-side routes would provide service along Tireman Avenue, which at that time was one of the few east-west roadways in that area leading directly to the city's midtown area, but not yet serviced by streetcars. That being the case, it wasn't too surprising that shortly after Detroit Motorbus (DMB) began providing bus service within the city of Detroit that service would eventually be provided along Tireman Avenue, one of the heavier traveled roadways within the recently annexed west-side territories.
The earliest roots of the Tireman bus line as we know it today originated during the summer of 1922, when Detroit Motorbus began providing shuttle service along West Grand Blvd., between W. Lafayette (where it also operated a bus route) and Tireman Street. To handle its west-side routes a temporary garage was rented on Ferry Park, but the following year the company began building its second bus garage, located at the corner of Tireman and Epworth streets. This new facility, known as Tireman Garage, opened in July 1923.

Meanwhile, beginning on April 3, 1923, a new Rt. 7 – West Grand Blvd.-Tireman line began providing service from the old City Hall (located at Woodward and Fort Street downtown) to the company's new Tireman Garage, where a bus loop had been built on the property. The route left downtown via Lafayette, W. Grand Blvd., and Tireman to Epworth Street. In 1924, the route was extended one mile westward, looping at Central Avenue near the old city limits. After additional territories were annexed to Detroit in 1926, the line was extended 2˝-miles west to Division Road (renamed Greenfield (c. 1930)).

Through the remainder of the 1920's, the West Grand Blvd.-Tireman line, along with seven other DMB routes, would together form a network of profitable and successful city bus routes operated by the privately-owned Detroit Motorbus Company.
However, by April 1930 the city of Detroit had begun experiencing major financial hardships as a result of the Great Depression, which was already taking a toll on the city-owned DSR operation. With the DSR experiencing declininig revenues, the Detroit Common Council ordered the DMB to scale down the operation of a number of its competitive bus routes. As a result, service on the West Grand Blvd.-Tireman line was cut back to W. Grand Blvd. and Fort Street. Consequently, during the last two years under Detroit Motorbus operation the Tireman line no longer provided service into downtown Detroit. However, this would only be the beginning of major changes to come.

THE CITY OF DETROIT TAKE-OVER:
In 1931—with the DSR's ridership and revenue numbers continuing to plummet—the Detroit Common Council decided that it was time to revoke the Detroit Motorbus Company's license to operate in the city of Detroit; as a means to help generate more revenue for the DSR. Consequently, effective January 1, 1932, the company's city-routes were taken over by the city-owned Department of Street Railways (DSR), and as a result the DMB's Rt 7-West Grand Blvd.-Tireman line now became the DSR's new "Tireman" bus line.

One of the first route changes implemented under the DSR was to extend the route one block east from Tireman and W. Grand Blvd. to connect with the Grand River streetcar by looping via W. Grand Blvd., Grand River, Vinewood, and Scovel to W. Grand Blvd., and then continuing onward to Fort Street. This change went into effective on January 4, 1932. Two weeks later, effective January 18, 1932, service into downtown, which had been discontinued in 1930, was restored, with service continuing from W. Grand Blvd. via Lafayette, Cass, and Fort Street to Cadillac Square.

Another notable route change—although the date implemented is not certain—probably occurred prior to the DSR take-over of the route. After Bonaparte Road had been renamed and converted into a through-road by merging it with Joy Road to the east (circa 1930), bus service on the Tireman route was extended to the new Joy Road by adding branch trips that turned onto American Street and looped one-half mile north to Joy Road; returning back to Tireman via Central Avenue (see map above). Trips via American to Joy Road were identified by coaches displaying a "Tireman-Joy Road" sign.

However, beginning April 25, 1938, the Tireman-Joy Road branch service was rerouted. Service via Joy Road was rerouted off of Tireman at Beechwood, and then traveled north along Beechwood to Dailey Street where it merged into Joy Road. This change resulted in two Tireman bus routes, both leaving Cadillac Square via Fort, Cass, Lafayette, W. Grand Blvd., and Tireman—with one branching off at Beechwood Street. Originally, the Tireman-Joy Road branch provided service to Joy Road and Schaefer, but on October 30, 1939, service was extended one mile west to Joy Road and Greenfield. Effective October 6, 1941, service was extended 2˝-miles west to Burt Road—and now traveled farther west than the main Tireman route a half-mile to the south. This two-route operation would continue for another decade. What then followed was rather bizarre, if not a bit confusing to riders, but actually laid the foundation for the two separate bus routes that still exist today.

In 1948, DSR management decided to extend the Myrtle bus route (one of the city's first streetcar lines to be converted to buses back in 1937) from its west-end terminus near W. Grand Blvd. and Myrtle (now Martin Luther King Blvd.). The Myrtle route—which operated along Myrtle Street into downtown via Grand River, Third, and Fort Street to Woodward—was extended westward along W. Grand Blvd and Tireman Avenue to Tireman and Greenfield. This new route resulted in a major portion of the Tireman route along Tireman Avenue (nearly four miles) being replaced and renamed as the new "Myrtle" bus line, effective July 18, 1948.

Confusion arose when, effective that same day, the former Joy Road branch (the "Tireman-Joy" route) now became the new "Tireman" bus line, although this route only traveled along Tireman Avenue one-half mile before turning north onto Beechwood Street. Patrons now had to remember that to travel along Tireman Avenue one would have to catch a Myrtle bus, while those traveling along Joy Road would need to catch a Tireman bus.

However, this confusion would only last less than one year, for on March 13, 1949, the situation was resolved. The recently renamed Myrtle line—which basically traveled from City Hall via Fort, Third, Grand River, Myrtle, W. Grand Blvd and Tireman to Greenfield—was renamed the "Tireman" line, while the former Tireman-Joy branch (recently renamed Tireman)—which basically traveled from Cadillac Square via Fort, Lafayette, W. Grand Blvd., Tireman, Beechwood and Joy Road—became the new "Joy Road" line. These changes launched the two bus routes that exist today.

Over the years, Joy Road has become more of a major thoroughfare, even forming part of the region's Mile Road street-grid system. During the DSR years, Joy Road bus service was extended further west into the suburbs, with service to Telegraph, then to Inkster Road, to Middlebelt, and later to Farmington Road by 1963. Service even operated to Westland Shopping Center for some years beginning in 1965. As for the Tireman line, service was extended further west to Spinoza Drive and Sawyer in Rouge Park in November 1964. Today, the Tireman line stands as the second oldest continuous running bus route in Detroit, second only to the Dexter line, another former Detroit Motorbus route. 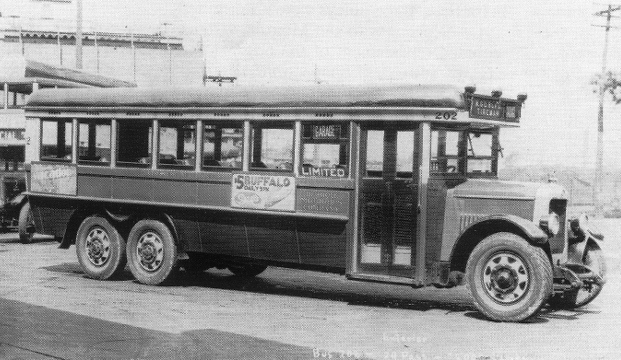 -- THE AFRICAN-AMERICAN MIGRATION ALONG TIREMAN AVE:
As mentioned above, prior to the massive annexation growth by the city of Detroit before 1926, Tireman Road served as the dividing line between the surrounding townships.  But after the 1920's, Tireman  would serve as another type of divide—the "Racial Divide."  For many African-Americans who lived in Detroit's second largest Black community, Tireman Avenue prior to the 1950's was considered the unofficial "Jim Crow Line," where de facto segregation, restrictive covenants, and race-oriented home improvement associations prevented African-Americans from moving north of Tireman Avenue.

By the 1920's, a rapidly growing enclave was developing south of Tireman that soon became home to a large portion of Detroit's upper class Black community. With the city's auto industry workforce rapidly increasing—sparked by Henry Ford's "$5.00-a-day" wage—many African-American Detroiters (including many hired by the auto industry) began moving out of the city's overcrowded "East Side Colored District" to the "West Side." This west-side African-American 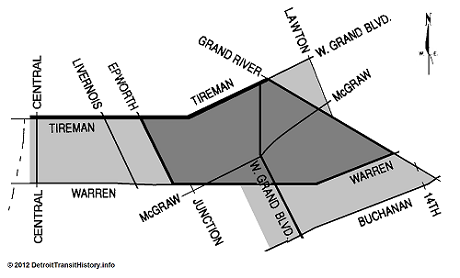 community was closer to those automobile manufacturing plants that were considered more friendly to hiring Blacks, such as the Lincoln Motors Livernois Plant (Livernois & Warren), Kelsey-Hayes Wheel Plant (Livernois & McGraw), and the Ford Rouge Plant in Dearborn.

The early boundaries of the "Old West Side" black community resided within an area roughly bounded by Tireman on the north, Epworth on the west, Grand River on the east, and Warren Avenue on the south.  As Southern blacks migrated to Detroit in large numbers during World War II in search for work in the city’s defense industries, the boundaries of the neighborhood would grow even larger, and by 1950 had stretched to Central Avenue on the West, Lawton on the east, and Buchanan on the south.  However, movement north across Tireman was still met with very heavy resistance until after 1950, shortly after the U.S. Supreme Court declared race-based restrictive covenants unconstitutional in 1948.

By 1940, this thriving and cohesive community was home to over 72,000 residents, and by 1950 over 300 family-owned black businesses were located there, including appliance stores, barber and beauty shops, drug stores, dry cleaners, gas stations, restaurants, and more
FOR RELATED TOPICS SEE: